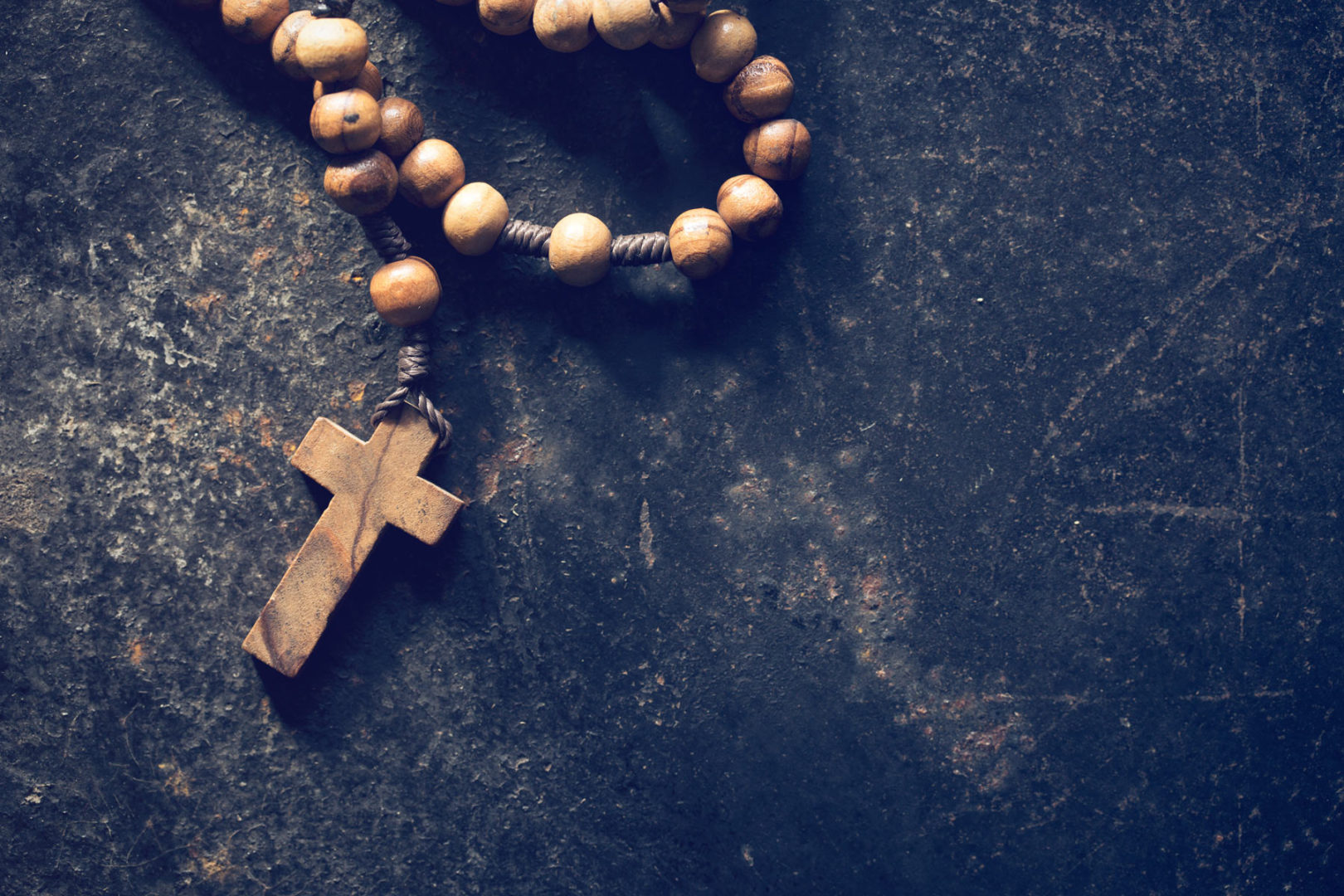 The church is now 114 feet long and the main part is 45 feet wide.  The steeple, extending upward 150 feet, soon became a landmark in this small river town.  Anyone approaching by river, from the south, can see the Immaculate Conception steeple five miles away.  Rev. John Nemmers of Gilbertville, Iowa, dedicated the new and enlarged church on December 8,1886.  He blessed the church and gave a sermon in German.  Also dedicating the church was Rev. Chas Carroll, D.D. of Dubuque, who delivered a sermon in English.  In the 1890's, the altars were purchased and in 1903 the Stations of the Cross were installed.  Smaller stations were purchased in 1949.  In 1905, a chime of three bells replaced the old bell; the church windows were replaced after 70 years of use in 1954 and the original 12 kerosene lamp chandelier was electrified in 1903.  Later, modern light fixtures were installed.  A new rectory was built in 1950, followed by installation of a microphone in the sanctuary and loud speakers in the church proper and in the room west of the sanctuary in 1955.  Two parishioners donated a new electric organ in 1962, replacing the pipe organ of 1899.  In 1974, the church doors were removed to make way for glass entrance doors.  A new church hall was the result of a 1978 renovation project, which included a new east entrance to the church.  Immediately following the interior of the church was redecorated.   Included in this renovation were the 23K gold leafing highlights, new seats, kneelers, and carpeting.  Both the hall and church were dedicated in April 1979.  In 1988, an air conditioner was installed in the church proper and hall.

The Priest and Parsonage

The parish was served by roaming mission priest until 1867, when Father Louis Cornelius became the first resident pastor.  He was followed by Father William Jacoby in 1868, who was pastor until 1877.  Records show that in 1868, the parish bought a frame house near the church for the first parsonage.  In 1893, the parish erected a brick parsonage.  After 56 years in 1949, the parsonage underwent a complete overhaul and was modernized.  From 1877 - 1880, Father J.  Urbany was pastor.  For five months after Father Urbany, Father Frederick W. Pape served as priest pro tem.  Then Immaculate Conception was blessed with a pastor for 62 years, Father George Haxmeier.  Father Haxmeier also served St. Joseph Church at New Albin from 1880 - 1903.  The passenger trains didn't run on Sundays, so Father Haxmeier visited New Albin by horse and buggy or horse and cutter.  In all sorts of weather, fair, rain or snow, sizzling heat or biting cold, he made the trip; when the going was good,it took him two hours each way.  In 1942, Father Haxmeier left and entered St. Anthony's Home in Dubuque, taking with him the title of Pastor on Emeritus.  He died at St. Anthony's Home on October 27,1944.  Father John Breitbach continued to serve IC after Father Haxmeier left.  He was the parish priest until 1943, when the Right Reverend Monsignor Henry C. Sharphoff was placed at IC.  During his two years in Lansing, Monsignor Sharphoff restored and improved the parish.  He was a modern priest with the spirit of a pioneer.

The following priest served throughtout the years at Immaculate Conception:

There were assistant pastors from 1936 until the school closed in 1973.  In addition, many Franciscan Sisters from LaCrosse were missioned to Immaculate Conception Parish. Notable among the sister's was Sister Catherine Schmitz.  For over thirty years Sister Catherine dedicated herself as a teacher, principal, and finally as Director of Religious Education.  When Immaculate Conception Grade School closed in 1968, she became involved in pastoral ministry and assisting the pastor.

The first parochial school, grades one through eight was opened in 1874 during the pastorate of Father William Jacoby.  In 1910, a new school was built next to the church, a combination grade school and the first high school and convent.  During 1911, the building originally known as the brewery on the south side of the street was purchased.  The high school transferred to this building in 1925.  The first class graduated from Immaculate Conception High School in 1914.  Materially, the first school was simple.  The basement room lacked all conveniences.  It was equipped with only such necessities as a stove, a few blackboards, tables and benches.  In a small section of the church basement closed off from the schoolroom by doors, stood a small altar.  Each school morning during the heating season, the basement became a church with the doors to the so-called sanctuary open.  There the priest offered the Holy Sacrifice of the Mass to avoid heating the church upstairs and thus conserve wood.  Amid the poverty of the first schoolrooms, the sisters taught all the basic subjects in any other grade school in those years, in addition to art and music.  For an unknown number of years, the parochial grade school charged a monthly tuition of 50 cents a child, with reduction in needy cases.  That tuition charge was discontinued sometime in the 1890's.  When the new church was finished in 1886, the school moved from the basement and the sister's house to the main floor of the old church.

Immaculate Conception High School, named St.George, was expanded into an inter-parochial school in 1957.  Students attended from New Albin, Wexford, Harper's Ferry, and Paint Rock, as well as Genoa and De Soto, WI. parishes.  The property west of and adjoining the convent was purchased from the Wagner family.  In November 1964, ground was broken for a new building and classes began in the new St. George High School in 1965.  Because of rising cost of operation, it was forced to close in 1973.  The building and facilities were sold to the Eastern Allamakee Community School District.  In 1910, the parish built a brick sisters' residence west of the new church on Main Street.  With three stories and a basement containing a kitchen, dining room, etc., the residence was connected to the school at the rear.  From the completion of the residence until the late 1930's, sisters kept borders.  They furnished room and board to a number of pupils from rural territory and other parishes.

The church didn't have its own cemetery until the fall of 1872.  The first parish cemetery was a plot of five acres, three miles west of Lansing on Highway 9.  On September 2,1893, for $375.00, the parish bought the present Gethsemane Cemetery on the North side of Highway 9.  The purchase consisted of 21.75 acres.  Henry and Albert Benninger built the chapel at the cemetery in 1901.

To the present time

In 2001, the Pastoral Council decided on a renovation / upkeep parish plan prioritized as follows: (1) parking lot, (2) new faith formation center, (3) interior church painting, (4) church carpet, (5) church hall renovation, (6) hard-surface parking lot.  The work on the parking lot began in the fall of 2002.  It began with removing the ground to street level and to erect a retaining wall on the west, north and east side with drain tile behind it.  The stone wall on the south side also needed to be rebuilt. In the summer of 2003, the parking lot was completed with a 24-inch base of gravel.  In the spring of 2006, the demolition of the convent has begun. The top portion was knocked down by hand and dumped in the middle of the building, when possible.  The windows of the church were boarded up to prevent damage.  It was a dusty, dirty job.  The walls were pulled to the inside and then cleaned up.  A section of the south retaining wall was removed so trucks could haul the 700 loads of brick, etc.  The demolition was completed.  In August of 2006, the foundation was poured for the new faith formation center.  The foundation is about 34 feet below street level on the north side.  In October 2006, the walls were poured, trusses were in place, and steel girders were positioned.  The framing was done and the new building was ready for the laying of the cornerstone in April of 2007.  In the cornerstone is our time capsule.  In July of 2007, Archbishop Hanus was here to bless the new faith formation center and overflow room.  Also in July work begun on the courtyard area with the placement of the Immaculate Conception statue and blessing the area.  November 10, 2008, parish members moved the scaffold and plank into the church and the interior church painting project began with the erection of the staging. On December 24, 2008, our parish doors were open to a beautifully  painted church where we all came together to celebrate the Birth of Jesus. Dec. 2011, we have begun the next phase, installing new carpet in our church.

During the year of 2010 the parish changed the name of the parish council to Immaculate Concetion Pastoral Council; rewrote the Pastoral Constitution to reflect the mission statement of the Archdiocese; combined the Faith Formation Committee with the neighboring parish of St. Joseph, New Albin forming one commission entitled "Immaculate Conception and St. Joseph Faith Formation Commission."  With one commission and one constitution.

Come, join us in celebration and together we can worship the presence of God in our lives.